The world noticed Kyary after her PONPONPON became a viral smash YouTube and Facebook.  To describe the PONPONPON video, is to describe a rainbow explosion of colors and in your face visuals that are only found on the worst of acid trips.  It is not uncommon to find talking onions, painted guns shooting out candy, unicorns, an smorgasborg of various fruits, healthy things, and purple colored people just to name a few.  This pairing of eccentric fashion and the forward thinking work ethics Japan is known for make Kyary quite an eyesore for many, however a refreshing one.  Words like “Harajuku” and “Kawaii” are almost second nature, never being a wrong fit for the over the top clothing and personality of young Kyary Pamyu Pamyu.  Her crazy outfits and bubblegum pop make her comparable to Lady Gaga, Katy Perry, or the French Yelle but with a distinct Japanese flavor.  It is pleasing to say her ways of “kawaii” are quite intoxicating as they are invigorating and refreshing. 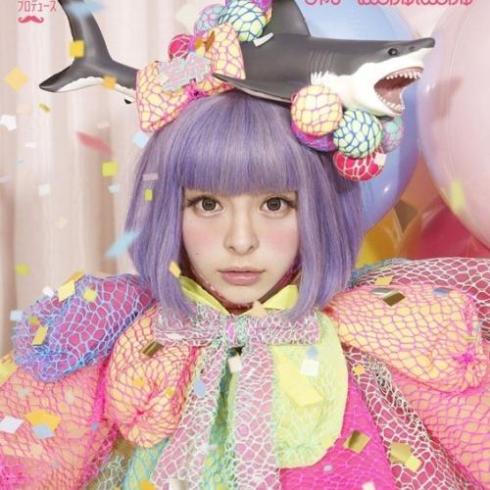 The album being produced by Yasutaka Nakata (known for working with other Japanese pop artists, particularly Perfume and Capsule) has created a very kitsch, and delightfully tacky album of catchy pop tart flavored dance music where anything could be possible when you think about how to visualize this music.  Kyary, an 18 year old model, actress, and singer has broken into the internet music waves after her debut full length album “pamyupamyurevolution” hits stores in over 51 different countries including her home in Japan.

Music videos are an important piece of promotion for a new artist like Kyary Pamyu Pamyu.  Without the success of her videos (the other two being Candy Candy and tsukema tsukeru) many people overseers would be unfamiliar with this at times cheesy yet entertaining personality.  Upon writing this review, the album is the number one album in the U.S. iTunes Electronic Album Charts, which is a very impressive feat, even outranking heavy weights like Bassnectar in the process.

The album “pamyupamyurevolution” is one where the dance music is standard JPop fare, where Euro influence has been dominant in current Japanese dance music for sometime, however the album expands on the idea of the celebrity and the fashion that is Kyary.  It is contemporary, but also very 90’s.  You could easily fit Barbie Girl (from europop group Aqua) in a playlist with Kyary very easily.  It’s an album where you wouldn’t be surprised if it came with a small box of pocky sticks or other kawaii things.  Some of Nakata’s other productions are more futuristic in fare, however pamyupamyurevolution is quite happy being in the present time, and concerning itself with nothing else.  Everything is happy in Kyary’s world, and she accepts no substitutes.  Listen to the singles (PONPONPON, Candy Candy, and Tsukema Tsukeru), and if you like those then try taking on the whole album, which has a similar flair, but takes on its own eccentric, childish, and intoxicating personality as a whole.  Japan may have found it’s own fashion martyr and patron saint of all things cute and bubbly with Kyary Pamyu Pamyu.  Maybe now is the time for the thunder of the far eastern lands to start to influence the modern west world, hopefully the ride is as entertaining as it is visually exciting.  Candy Candy, Candy, Candy, Candy, Candy, Candy, Sweetie, Sweetie, Girls Love, Chewing Chewing, Candy Land.

BUTTER YO BREAD! A PLACE TO GET YOUR BREAD BUTTERED! BRING THE LOTION! Writing about music, art, and anything else which makes you wanna butter some bread!
View all posts by butteryobread →
This entry was posted in Music and tagged 2012, capsule, electronic m, electronic music, fashion, harajuku, japan, jpop, kawaii, kitsch, kyarypamyupamyu, lolita, perfume. Bookmark the permalink.