“Friends With Benefits” Film Review (No Spoilers! Only insight!) 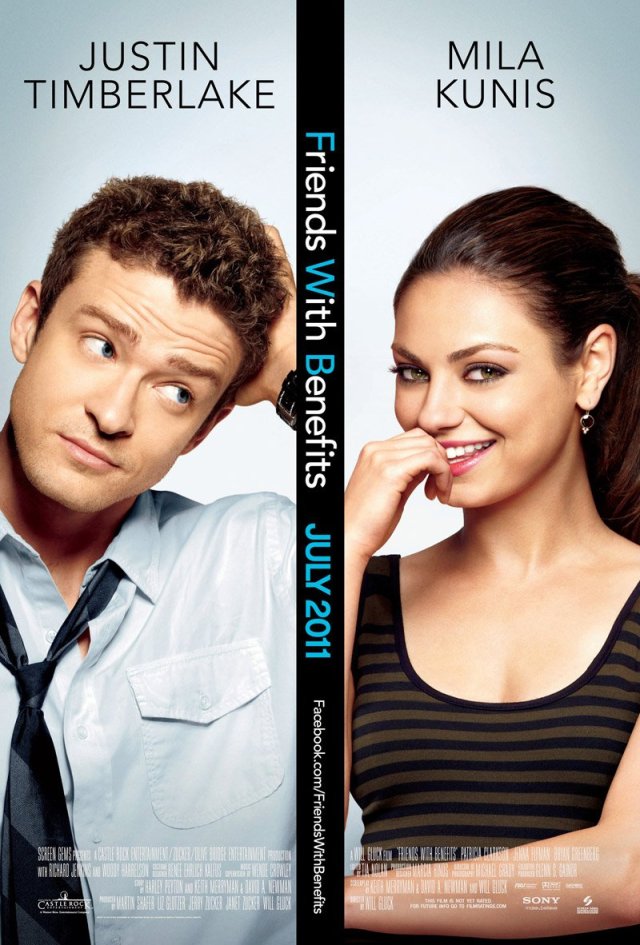 Friends With Benefits is a romantic comedy featuring Mila Kunis and Justin Timberlake which was released to theaters on July 22, 2011. The movie comes off the newly cliche idea of having friends merely to crave the desire of sexual conquest and have no emotional attachments or hangups after doing so. No Strings Attached, and Love With Other Drugs are other films that have embraced the idea of casual sex, or “fuck buddies” for lack of a better word.

What makes the movie appealing, is the ability to relate to people in today’s world, where crazy schedules, work commitments, and the increasingly short attention span of people in general have effected the whole “relationship and dating world of today” which makes fairy tale romance fantasies such as “Prince Charming’s and True Love” nearly impossible to obtain. The idea of having “Friends With Benefits” is one that almost sounds disposable, but ideal for someone who fears commitments, which is what the movie is about.

The movie’s stars Mila Kunis (Jamie), who is a tough talking job recruiter from New York City who finds Justin Timberlake (Dylan) to be a promising art director for a small internet company in Los Angeles. After much effort Jamie convinces Dylan to move to New York City to take the position as Art Director for GQ Magazine. After Mila spends the evening showing Dylan around NYC, Dylan accepts the position and they start working together, which is where all the fun begins.

Moving forward the film takes you through all the parts of a typical relationship forming together from hanging out for the first time, all the way to having sex out of boredom after establishing a friendship. Ground rules are laid down, and the two begin to have steamy, quirky sex which entertains the audience as many of the sexual cliches and humors seen in the film hit hard at home for dating couples and jaded individuals who have came off of a serious love interest. The film shows the ups and downs of a friendship, and makes it very comparable to dating someone, whether the persons involved choose to accept it or not. Even during the times where Kunis and Timberlake call it off, they immediately pursue “rebound” sexual partners and the phone calls and text messages ensue afterwards. It’s like the jealousy/competitive edge part of getting involved with someone. They don’t want to have sex with you, but they get jealous when you tell them you’re dating other people. It’s all part of the game, and this movie shows many other scenarios of the game, including a sensual word play game where the two describe body parts they find attractive of each other, and the infamous weekend get away trip that plays a major role in all of our love lives. It all creates a humorous take on the dates we have been on, and the experiences of rejection, jealousy, insensitivity, and lack of logical reasoning that we have all engaged in. 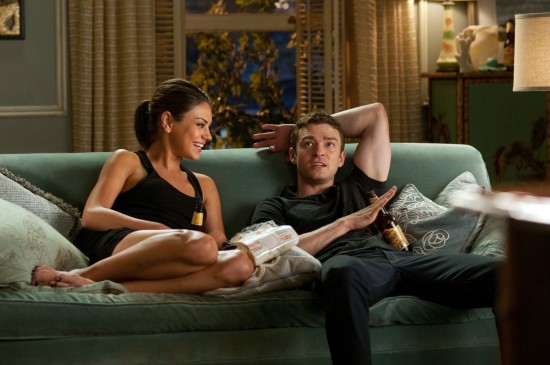 Some good supporting actors also include Woody Harrelson who plays as the boy-crazed gay sports editor for GQ Magazine who seems more interested in courting the “cream of the crop” gay boys in NYC over editing sports articles. Snowboarder Shaun White also makes a couple cameo’s throughout the film playing as himself, who is friends with Jamie, who forms a rivalry with Dylan in efforts to “take Jamie to pound-town” and land Jamie in bed.

For dating couples, this movie makes for a great date-night sort of movie, and will please you well. By no means is the film a classic by any means, but it does make for a good night out and will probably lead you to some sexual games of tennis afterwards, and will not make the night a bust. I would rate the film higher, but it doesn’t show the level of creativity a film like Eternal Sunshine of the Spotless Mind where it really tries hard to provoke the thinking process of sexual and emotional attachments with people. However, it does make a fun, quirky romantic night for all of those interested, today’s college students and young professionals will definitely get a kick watching this one.

BUTTER YO BREAD! A PLACE TO GET YOUR BREAD BUTTERED! BRING THE LOTION! Writing about music, art, and anything else which makes you wanna butter some bread!
View all posts by butteryobread →
This entry was posted in Movies and tagged 2011, dating flicks, entertainment, fluffy, foofy, justin timberlake, mila kunis, romantic comedy, summer movies. Bookmark the permalink.